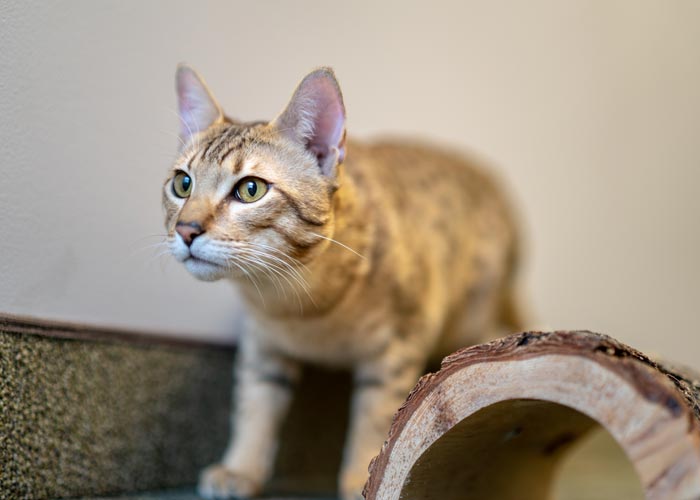 The African Serval is a medium-sized non-domestic cat that roams the savannah regions of sub-Saharan Africa. It is a very majestic and noble-looking cat, with a lean and elegant frame. It has long legs, tall ears, and ink-black spots against a golden buttery base coat. A male serval is bred with a female domestic cat to produce a litter of hybrid savannah kittens. Responsible breeders use selective breeding techniques to obtain kittens that retain the exotic wild physical traits of the serval while exhibiting the mild, playful temperament and manageability of the domestic cat. Once you have seen a serval, it becomes easy to understand why the hybrid savannah cat is so desirable.

The savannah cat is the largest hybrid cat available today. Initially, some breeders were mating servals with Ocicats, Siamese, Bengals, and Chausie cats. However, the Savannah Cat Association (SCA)2made it clear that they did not want other hybrids mixed in with the savannah, (Bengals are hybrids produced from Asian leopard cats and Chausies are hybrids produced from the jungle cat). A litter produced from crossing a serval with a domestic cat is known as ‘first-generation’ or F1 savannah cats. When an F1 savannah is bred with a domestic cat their kittens are called F2, or ‘second-generation cats, and so on. Male Savannah cats are usually infertile until they are F5 or later. Many F1 savannah breeders will breed a serval with a lower-generation savannah, such as F6 or F7 to maintain the purity of the savannah breed and avoid the mixing in of multiple breeds. This also allows a breeder to further refine the wild look of the savannah cat.

Savannah cats are very energetic and highly intelligent creatures. While higher-generation cats (F1-F4) typically do not like being held, they love to play and be petted and further indulged. They will often follow you around the house desiring to be the center of your world. They may frequently “headbutt” their owner. Savannahs are very curious and can be quite mischievous, often easily figuring out how to open doors, drawers, and cabinets. You may find it necessary to “baby-proof” your home before your new kitty arrives. Many savannahs love to play in or with water and may even drink from your faucet when it is on! Savannahs love to jump in the air chasing toys on a string and may even play fetch with you. Many owners will say savannahs are more dog-like in their personality than cats.

Footnote: the SCA is an organization that promotes responsible breeding and educating the public about savannah cats and their care.

Savannah cats typically get along well with other family pets, particularly dogs. They are also good with children although if you are considering purchasing an F1 or F2 savannah, please be aware that very small children may be at higher risk of scratches or be knocked over by these large cats. Small rodent-like pets or flying pets may not be safe with a savannah.

Savannah cats typically range in size from 15-30 pounds for a male and 9-18 pounds for a female, depending on their generation. They often appear heavier than they are because of their elongated body and long legs.

Savannahs do not require a special diet, although they should be fed a high-quality, grain-free dry food. Although canned food is not necessary for adult savannahs, they will enjoy it as a snack a few times a week. Moonlight Savannahs will be happy to provide you with recommendations for feeding.

Savannahs do not require special veterinary care beyond what any cat needs. They require the same vaccinations as regular domestic cats. If you are considering a higher-generation savannah (F1 or F2) it may be best to introduce them to your vet early on to make future trips less stressful. Your new kitty will be ready to come home between 10-12 weeks of age and will be up-to-date on all age-appropriate vaccinations. At this age, they will be socialized and confident enough to be away from mom. Moonlight Savannahs will provide you with a health certificate from our veterinarian.