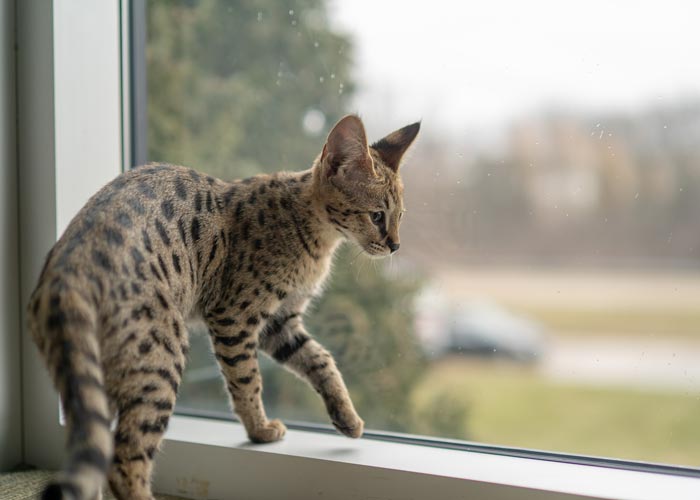 Many prospective buyers may be confused by the letter/number/combinations of F1, F2, F3, etc. Before the savannah cat became recognized as a domestic breed by TICA, these alpha- numeric designations were used by breeders to categorize their cats by generation. The “F” stands for “filial” generation, that is the number of generations the cat is removed from its serval ancestor. For example, an F1 cat is one generation from a serval and so on.

Savannah cats are classified by their generation so breeders and prospective buyers like you can better predict temperament, coloring, and exotic markings.

The F1 cat is the largest hybrid offspring of a serval-to-domestic mating. An F2 cat has at least one parent that is an F1. An F2 cat may not be quite as large as the F1 but will still retain many of the other characteristics of an F1. An F3 cat, again not as large as an F2, although still large, is even more domestic than an F1 or F2. F3 cats tend to be even more friendly with young children than the higher generation cats, and as such would be a great cat to start with for a family.

The A, B, C, and SBT designations are part of a code used by TICA to indicate the cats’ registration status and pedigree. Every cat registered with TICA has a registration or code number. In basic terms for a savannah:

A kitten that has SBT (Stud Book Traditional) in its registration code has at least three generations of savannah-to-savannah matings in its pedigree. Therefore only F4 kittens or later can be designated as SBT. A savannah must be an SBT to show in the championship class.

Here are some sample crossings:

F1 savannah cats are the largest of the savannah cats. They are 50% serval and 50% domestic cat. The goal of responsible savannah breeders is to produce a wild-looking elegant cat with a domestic-cat personality. Due to the laws of genetic inheritance, percentages of serval higher than 50% in savannah cats are only an estimate. An F2 Savannah will get 50% of its genes from an F1 and 50% of its genes from another cat, which may or may not be a savannah. The F1 parent might pass on more domestic traits than serval traits. Therefore, to know the exact percentage of serval blood in a savannah other than an F1 would require genetic testing.

F1 savannahs are beautiful, elegant cats that can turn heads when you bring one into a room. However, they are not for everyone. Since they are very close to the serval, F1’s and usually F2’s, demand a lot of attention. They are very curious and can be quite mischievous. They often like to cavort around the house and may knock your belongings over if you have things unsecured. They tend to be stand-offish to strangers and generally do not socialize well with children. While they are not aggressive cats, they typically prefer to bond with one or two people and can be a bit “snobbish” to others. They can jump about 8 feet and will often perch themselves on the highest piece of furniture/shelving, etc., in the room. Their size is often exaggerated and people may think they get bigger than they actually do. F1 savannahs have long legs and tall ears but they appear heavier because of these traits. They are usually in the 15-25 pound range and about 22-24 inches from the chest to the base of the tail.

F1 savannahs will love to play and be petted, but they definitely are not lap-cats. It is unlikely that an F1 Will allow you to pick it up or hold it for any length of time. They get along well with other pets but will usually establish themselves as the “alpha.”
Trips to the vet may be challenging with an adult F1. An early visit with your vet while your savannah is young will help him/her get used to the environment of the vet’s office and may help to ease anxiety.

F2 savannahs are similar to F1’s in some ways but not necessarily in others. Because of the laws of probability in genetics, some F2 kittens may look more serval-like while others may appear more domestic-looking. Still, with greater intelligence and energy than a non-savannah, they may, however, be somewhat more manageable than F1’s.

Savannah cats that are F3 and later generation are typically better suited to busy and/or large families. These cats are usually more relaxed with a larger number of people and generally more social with strangers. Savannahs, in general, are more intelligent and more energetic than typical domestic cats. As such, these later generations will be more favorable to being played with and possibly be held as well. They may want to sit on your lap and will usually welcome playing with children.