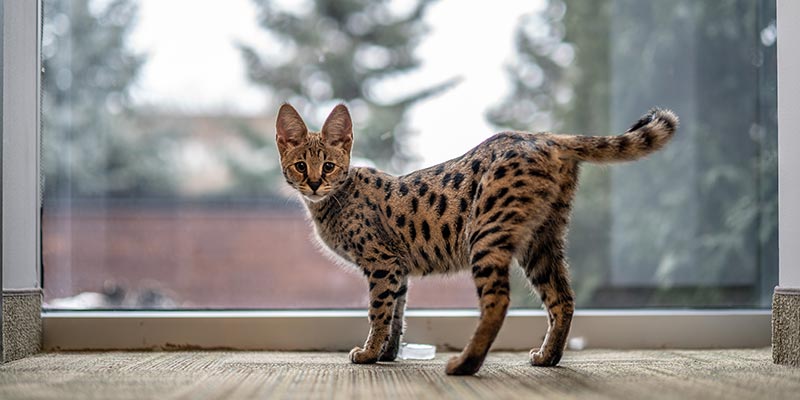 Judee came into possession of a small serval male in 1986. Unbeknownst to Judee, this serval, named Ernie mated with Judee’s female Siamese cat which resulted in the birth of a very unusual looking kitten on April 7, 1986. Judee named this kitten Miracle, which had many of the physical characteristics of Ernie.

Miracle had black spots, long legs, tall ears, and a short tail. Judee turned this kitten over to another breeder who renamed her “Savannah” and thus began the breed we now know as the Savannah cat. This kitten came to be referred to as a first-generation (F1) savannah.

In 1989 another breeder named Suzi Mustacio bred the kitten named Savannah to a male Turkish Angora cat. These “F2” savannah kittens were born on April 5, 1989. Two of these kittens survived one male and one female.

Lori became the owner of the F2 female. When this cat had kittens, one of these “F3” kittens was sold to Patrick Kelley. Patrick first saw an F1 savannah in a photo in a newsletter of the Long Island Ocelot Club (LIOC) in 1986. This was the beginning of Patrick Kelley’s love of Savannah cats.

In 1989, Patrick Kelley met a man named Bill Stroufe at an auction in Missouri. Bill was selling some serval kittens for his wife, Joyce. Joyce had been breeding Bengal cats, servals, and caracals.

Patrick began communicating with Joyce to spark an interest in this new savannah breed. In time, Joyce agreed to breed first-generation savannahs. Patrick assisted Joyce in finding homes for these kittens and in promoting the Savannah cat breed.

In 1996, Patrick Kelley began the arduous process of having this new Savannah breed recognized by The International Cat Association (TICA) as a championship breed. With the help of Leslie Bowers, executive secretary of TICA at that time, Patrick completed the first application to get the Savannah breed accepted by TICA into the New Breed Program.

In 1996 Patrick Kelley and Joyce Stroufe wrote the first Savannah cat breed standard, which was then submitted to TICA. However, at TICA’s board meeting that year a 2-year moratorium on any new breed began. In 1998, another moratorium was enacted regarding any new cat breeds. The Savannah breed’s future was at this time uncertain. The several breeders that were involved were losing hope that this beautiful new breed of cat would ever be officially accepted as a legitimate breed.

Information on the history of Savannah cats gleaned from The Savannah Cat Association 1 website, used with permission

During this time, Lorre Smith, who had been breeding Bengals, began breeding savannahs in 1995. Lorre, who was one of the first three people to breed the F1 Savannah cat, brought her savannahs to some of the international cat shows. There, she was able to introduce these cats to some of the TICA officers and judges who were able to hold and interact with the Savannah cats.

A TICA judge named Bobbie Tullo became interested and served as a mentor to Lorre and became a great help to the Savannah breed. Lorre was the original savannah breed chairperson. She is also the author of “the Savannah Cat Book.”

In 1999, Gary Fulgam formed an email group on Yahoo with the goal of networking with other savannah breeders and thus to develop a “community” of Savannah breeders that could exchange information and share experiences concerning, in particular, F1 Savannah cats. This group turned out to be a great resource for these early breeders and became the foundation of the Savannah cat breed.

In September 2000, at the annual TICA board meeting, the aforementioned moratorium ended and the New Breed Program began. This original handful of breeders began to meet together to revise and clarify the Savannah Breed Standard. By October of 2000, Lorre Smith submitted this new breed standard to TICA, requesting that the Savannah breed be advanced to “registration only” status.

In February 2001, TICA assigned the Savannah cat this “registration only” status, a big first step for the Savannah breed. The original 18 breeders registered their savannahs and began to help many other new breeders to become TICA members. In October 2001 the Savannah breed was unanimously accepted for exhibition.

This meant that any savannah cat that was a 3rd generation or later, could be exhibited in the show halls. The first show to include the Savannah breed was in Oklahoma City in May of 2002. In May of 2012, the Savannah breed attained championship status and can now compete against other cat breeds.